Am Klavier: Frizz Fischer
In the apparent impossibility of attainment lies the great freedom of opportunity. It is only if you have the courage to do so that you can find it.
Beatrice Gleicher

Dein ist mein ganzes Herz (You are my heart’s delight)

René and Beatrice, two singers, meet up with their pianist in a theatre to rehearse for an up-coming Fritz Löhner Beda evening. As if travelling through time, Beatrice and René repeatedly turn into Helene and Fritz Löhner Beda, and tell the story of their lives from 1928, the year in which Fritz Löhner Beda celebrated his 45th birthday. This was just before his career really kicked off. The scene keeps on changing to the present, in which the two singers rehearse the musical numbers that Löhner has just written. That which starts out as cheerful, peppy and carefree is gradually overshadowed by the political situation of the approaching Second World War. After Fritz is picked up by the Gestapo Helene, who has stayed in Vienna, desperately tries to have her husband released from “protective custody”. However, she too falls victim to National Socialism in the end. 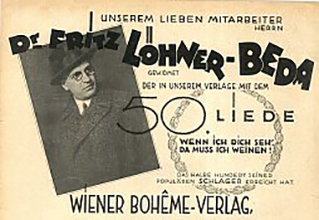 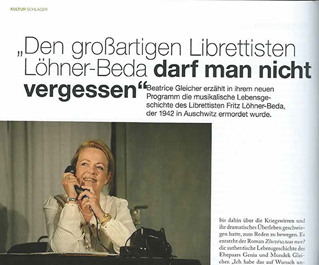 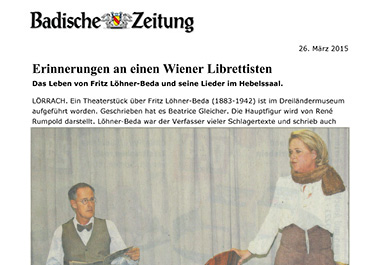